The world’s highest railroad across the Tibetan plateau to Lhasa (completed in July 2006) is the most high-profile symbol of Beijing’s ambitious plans to develop the western regions of the People’s Republic of China (PRC). As an indispensable element of Beijing’s ‘transportation revolution’, the aim of its construction is to expand the influence and consolidate the control of the Chinese Communist Party, which regards this as crucial to China’s successful rise in the 21st century. 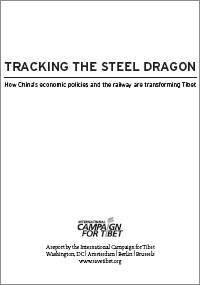 A report by the International Campaign for Tibet, Tracking the Steel Dragon, details the strategic significance to China of the extension of its national rail network into central Tibet, which Beijing describes as ‘the southwestern frontier of the motherland’, and the projected expansion of the line within Tibetan areas of the PRC and to Nepal. The Chinese government has recently acknowledged the military applications for the railway for the first time.

ICT has documented the immediate impact of the railroad from Golmud in Qinghai to Lhasa in the context of China’s strategic and economic objectives and reveals that Beijing’s policies on the plateau are:
Leading to a ‘second invasion’ of Tibet by accelerating the influx of Chinese people.
Causing the further exclusion of Tibetans from economic activity – which even Chinese analysts believe risks provoking the very despair and opposition feared by the Chinese state in its quest for ‘political stability’.
Damaging Tibet’s fragile high-altitude environment, with disturbing implications for millions of people in the entire Asian region.
Threatening the extinction of one of the last examples of sustainable pastoralism on earth.
Heightening military readiness on the Tibetan plateau through the expansion of Chinese influence and construction of civil and military transport links, causing concern in neighboring India linked to disputed territory issues in the border areas between the two Asian giants.
Causing concern for the survival of Tibet’s culture and religion, which is integral to Tibetan identity and important not only to Tibet, but also to China and the wider world.

The International Campaign for Tibet argues that only a re-orientation of economic strategy towards local integration – in effect, ‘Tibetanizing’ development – and the participation of Tibetans in decision-making on their economy could reverse the trend of marginalization and estrangement and ultimately benefit the entire Asian region.