THE FRENCH EU PRESIDENCY: WHAT OPPORTUNITIES FOR HUMAN RIGHTS IN CHINA AND TIBET?

On 1 January 2022, France will take over the rotating presidency of the Council of the European Union.

What actions and initiatives could it put on the table to try and advance human rights in China and Tibet? And which European partners who could be involved ? In order to answers to these questions, Michael van Walt van Praag, professor of international law and author of Tibet Brief 20/20, will share his recommendations with French parliamentarians and French Members of the European Parliament.

This episode will be in French and will be live-streamed on the Facebook page of International Campaign for Tibet Brussels. The recording will also be available on savetibet.nl afterwards. 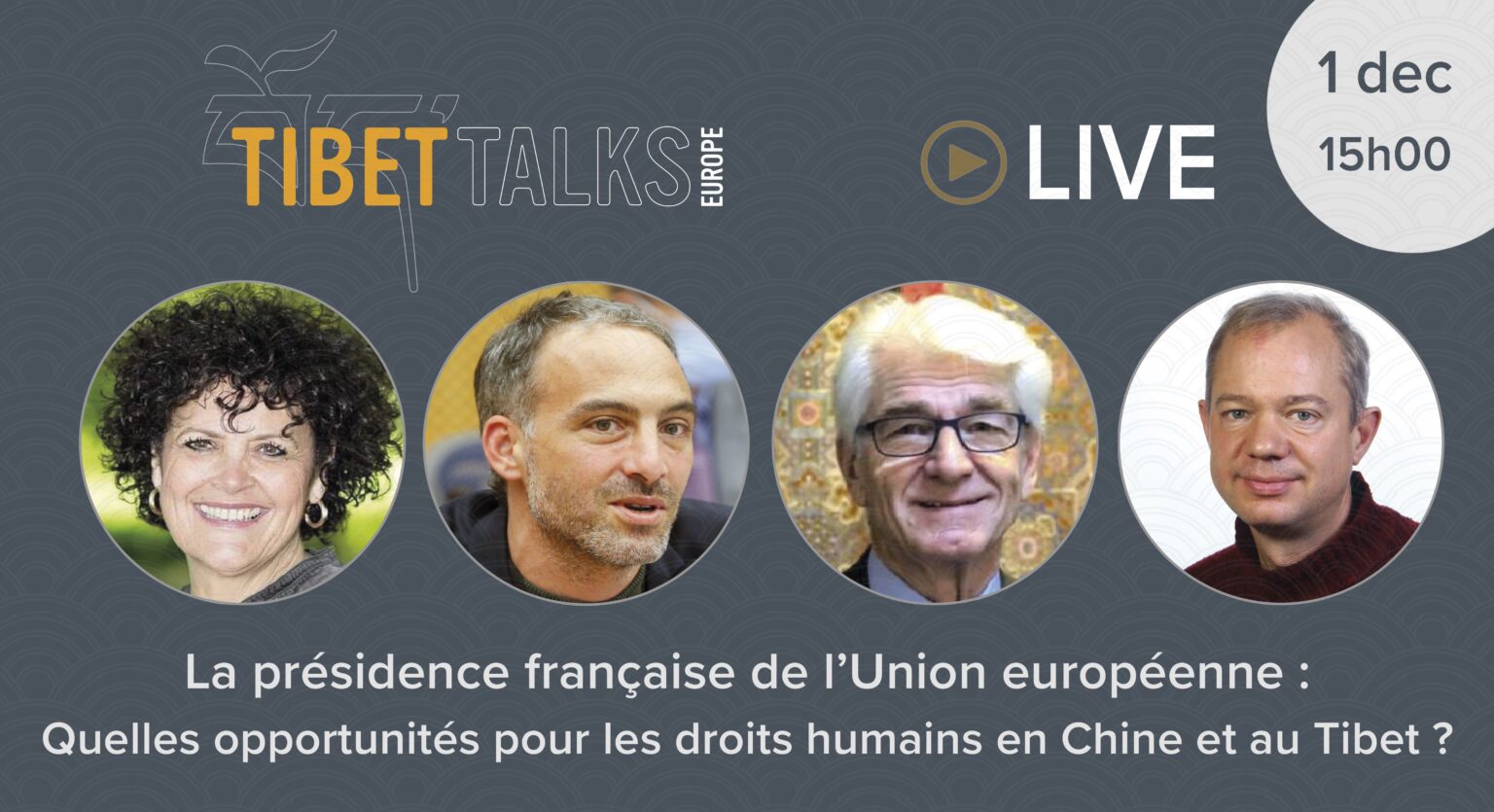 In the last years, travelling to Tibet as a journalist, a diplomat or even as a foreign tourist has been a challenge. Christelle Genoud has recently visited Tibetan areas in Sichuan, Qinghai, Gansu and Yunnan on various occasions as a diplomat and as a tourist, and closely kept abreast of the evolutions related to visiting the Tibetan Autonomous Region. She currently works as a Researcher at Kings College London, where she continues analysing the Chinese human rights narrative in Tibet as well as China’s development strategy in the region.

In this episode of Tibet Talks Europe, Christelle will discuss with ICT Europe’s EU Policy Director Vincent Metten the dynamics at stake around visiting Tibet, her own experience travelling in the region, as well as current human rights issues.

Donors were invited to bring your questions, like: What’s the situation in Tibet today? What are the US and European countries doing to help? What’s ICT working on? And, how can we support the Dalai Lama’s vision? You ask the questions—we’ll answer them.

8 juli 2021 (This episode of Tibet Talks Europe is in French, with English subtitles)

Nepal has long been a refuge and a transit point for Tibetans fleeing the Chinese repression. But in the last few years, the growing Chinese influence on its Himalayan neighbour, and the increased cooperation between the two countries – including on matters related to national security – has increased the vulnerability of Tibetans living in the country, who lack legal status and face considerable restrictions of their rights and freedoms. What is the nature of the relationship between China and Nepal, and what are Beijing’s interests in this country? And what is the situation of Tibetans in Nepal?

This episode of Tibet Talks Europe is released (in French with English subtitles) on ICT Europe’s YouTube channel on 8 July on the occasion of the adoption of Nepal’s Universal Periodic report at the UN Human Rights Council.

Tibet Lobby Day 2021 – Exchange of views between Tibetans from Europe and Members of European Parliament.

In conversation with the author of Tibet Brief 20/20, Michael van Walt van Praag

According to the Chinese government, Tibet has always been part of China. According to Michael van Walt, this claim has no legal basis.

“China has occupied Tibet against the will of the Tibetan people for nearly three generations now. Its sovereignty claim to Tibet has no legal basis and rests solely on a self-serving historical narrative. This narrative is Sino-centric, part inaccurate and part misleading. But it is so persistently and forcefully pushed by Beijing, that the world has gradually bought into it and today largely treats Tibet as China’s internal affair, beyond its purview. ”

Find out in this Tibet Talks Europe, what the implications of Michiel van Walt van Praag’s new research: Tibet Brief 20/20 are for China, and listen to the discussion on how this research helps to achieve a negotiated solution for the Sino-Tibetan conflict.

This episode of Tibet Talks Europe (TTE) was live on March 2nd, 5PM. Due to connection issues the video of speaker Michael van Walt van Praag stalled at some instances during the Tibet Talks video, however audio is uninterrupted during the entire conversation.

Tibet Talks Europe #9: ‘Harder to visit than North Korea’: The lack of access to Tibet for foreign journalists

9 December (This 9th episode of Tibet Talks is in English)

For years now, the People’s Republic of China has ranked as one of the worst countries for press freedom in the world, and Tibet – along with Xinjiang – is regarded as one of it’s “red zones”, regularly described by journalists as harder to visit than North Korea.

What obstacles and challenges do foreign journalists who try to visit Tibet and report about the situation there face? What is China trying to hide in Tibet, and what does the lack of independent reporting on the ground mean for accountability?

Find out in this episode of Tibet Talks Europe featuring Ursula Gauthier, Garrie van Pixteren and Brice Pedroletti, three European journalists who have or have tried to access to Tibet!

15 octobre (This 8th episode of Tibet Talks is in French)

In this first episode of Tibet Talks Europe in French, Vincent Metten: director of European affairs of ICT Europe, interviews tibetologist Katia Buffetrille about her newly released book: ‘L’Âge d’or du Tibet’ (The golden age of Tibet) and the worrying current situation in Tibet in view of China’s intensive policies of oppression and assimilation.

30 September (This 7th episode of Tibet Talks is in English)

How do MPs in the countries that Minister Wang Yi visited appreciate the visit? What does Minister Wang Yi’s visit and the EU-China summit mean for EU-China relations, and for effective diplomacy on Tibet?

This episode of Tibet Talks Europe explores these questions with Members of Parliament from France, The Netherlands, Norway and the European Parliament.

The interactive panel was moderated by Pim van Galen.

25 september (This 6th episode of Tibet Talks is in English)

In this interview with Tenzing Sonam, ICT’s Christa Meindersma asks filmmaker Tenzing Sonam about the making of the film: The Sweet Requiem.

The Sweet Requiem tells the story of a young, exile Tibetan woman who unexpectedly sees a man from her past, long-suppressed memories of her traumatic escape across the Himalayas are reignited, and she is propelled on an obsessive search for reconciliation and closure.

What compelled Tenzing to write and direct this film, together with filmmaker Ritu Sarin? Why is it so important for Tibetans to tell this story?

Enjoy this Q&A with filmmaker Tenzing Sonam, and find out!

Tibet Talks Europe #3: Live panel on EU-China relations and Tibet: How much space for human rights during the German EU-presidency?

30 June (This 3rd episode of Tibet Talks is in English)

From 1 July 2020 on, Germany will hold the EU Presidency for the following six months. What should Berlin and the EU aim to achieve in terms of the situation in Tibet? How should a more assertive, united and ambitious EU policy look like?

Tibet Talks Europe #1: China’s place in the post COVID-19 world and its consequences for Tibet

16 June (This 1st episode of Tibet Talks is in English)

This panel explored the contours of a post-Corona Tibet and its implications for meaningful engagement of European countries with China over Tibet.

or email your questions before the event:

SIGN UP FOR MORE INFO AND UPDATES FROM ICT