Torture and Impunity – 29 Cases of Tibetan Political Prisoners” details specific cases of the 14 Tibetans, from an educated Tibetan in his early forties to a Buddhist teacher, who died as a result of torture in custody as well as the 15 others who survived but are still suffering. 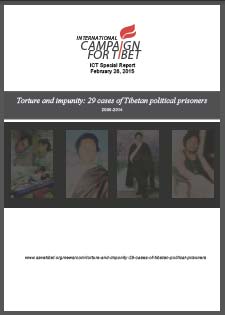 It also details the impact of imprisonment – whether extra-judicial, interrogation or a formal sentence – on the lives of Tibetan political prisoners released over the past two years whose ordeals have become known to the outside world, despite rigorous controls on information flow.