Tibet at a Turning Point

Tibet at a Turning Point

In spring 2008, a tidal wave of mainly peaceful protests against the Chinese government swept across Tibet. Tibetans risked their lives to demonstrate that their exiled leader, the Dalai Lama, and not the Chinese state, represents their interests. This uprising is a result of more than half a century of Communist Party misrule and revealed the breakdown of Beijing’s Tibet policy at a time when China sought to convey an image of harmony in the buildup to the Olympics. 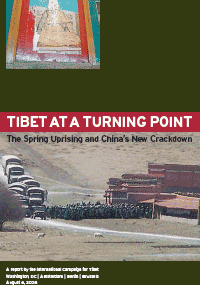 Hu Jintao’s leadership appeared to have found itself with no other means than force and intimidation to restore control, and imposed a brutal crackdown that owes more to the political extremism and paranoia of the Maoist era than to a 21st century would-be superpower. China dramatically tightened security in Tibet and announced new “anti-terror” plans in order to prevent any possible embarrassment to the ruling Communist Party before a worldwide audience during the Olympics.

In order to hide its repression in Tibet, Beijing has sealed off virtually the entire plateau and imposed a news blackout. ICT’s report includes evidence of:

The “disappearance” and detention of hundreds of Tibetans, including monks, nuns and school children, who were treated with extreme brutality in custody;
Unarmed peaceful protestors shot dead and names of those who have died following torture in prison or as a result of suicide due to despair over the crackdown or being made to denounce the Dalai Lama;
More than 125 protests across the Tibetan plateau – the overwhelming majority non-violent;
Sweeping new measures to purge monasteries of monks and ban worship in the wake of the protests, revealing a systematic new attack on Tibetan Buddhism led by Chinese leader Hu Jintao that is reminiscent of the excesses of the Cultural Revolution;
The International Campaign for Tibet called for world leaders attending the Olympics to publicly express concern in Beijing about the crackdown in Tibet and the suppression of freedoms that led to the spring uprising. The Chinese leadership must also be pressed for a full accounting of the more than one thousand Tibetans whose status following the spring demonstrations in Tibet is unknown.

President Hu, whose rise to power is linked to his role as former Party boss in Tibet, was involved in drafting the hardline policies that led to Tibet’s spring uprising. In order to resolve the deepening crisis now, President Hu must be urged to engage directly with the Dalai Lama – recognized by the world as the pre-eminent representative of the Tibetan people – on Tibet’s future.