The Communist Party as Living Buddha

The Communist Party as Living Buddha

The boy recognised by the Dalai Lama as the Panchen Lama, one of Tibet’s most important religious leaders, marked his 18th birthday and coming of age on April 25, 2007, after more than a decade in Chinese custody. 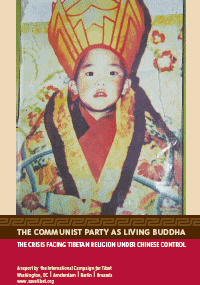 The Panchen Lama’s plight has come to symbolize the crisis facing the survival of Tibet’s religious culture. ICT’s report documents a trend of tightening control over religious practice and scholarship in Tibet.

Using information from official documents obtained from Tibet and interviews with reincarnate lamas, monks and nuns from Tibet, the report documents:

Disturbing precedents on religious practice in the Tibet Autonomous Region.
A stepping up of the patriotic education campaign in religious institutions.
A commitment by the government of the People’s Republic of China to strengthen the powers of the Chinese Communist Party’s Democratic Management Committees in religious institutions.
A renewed determination by Chinese authorities to crack down on the influence of the Dalai Lama in Tibet.
The severe undermining of traditional systems of monastic education.
Appropriation by the atheistic Chinese state of authorities necessary for the transmission of teachings and the identification of reincarnate lamas.

Gendun Choekyi Nyima was ‘disappeared’ with his parents at the age of six after he was recognised by the Dalai Lama as the 11th Panchen Lama, and since then his whereabouts has been unknown despite repeated requests for access to him by governments and international organizations worldwide. Control over the Panchen Lama is perceived by Beijing to be essential as previous Panchen Lamas have played a role in the recognition and education of Dalai Lamas, and vice versa.