Two new ICT reports document the dangers for Tibetans in Nepal due to the Chinese government’s focus on Tibetan issues in its relations with the Nepalese government, and shifting internal politics in Nepal. 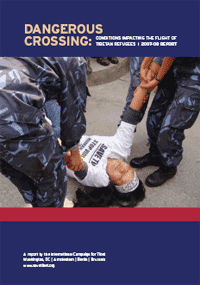 As a result, the Nepalese government has adopted a hard line against expressions of the Tibetan identity in Nepal, despite strong cultural and religious ties among the Himalayan peoples that have existed for centuries. Long-staying Tibetan refugees in Kathmandu and in settlements close to the Tibet-Nepal border are increasingly demoralized — and fearful — as the Nepalese government relinquishes its historic and sovereign interests in response to incentivized political pressure from Beijing and its sympathizers.

Mary Beth Markey, Vice President of Advocacy of the International Campaign for Tibet, said: “Nepal’s political leadership is betting that the internal benefits of assuaging China in the cause of oppressing Tibetans will be greater than the costs of abandoning principles rooted in traditional legal and historical concepts. While long-staying and transiting Tibetan refugees bear the brunt of this approach, bending to China on fundamental freedoms and the rule of law presents a real risk to the Nepalese people and their democratic institutions.”

Nepalese civil society activists and human rights monitors who are supportive of the Tibetans’ plight and seek to counter Beijing’s influence stress the close historic, cultural and religious ties between the Nepalese and Tibetans that date back to the 6th century. Himalayan Sherpa, Tamang, Dolpo, Mustang and other Himalayan people share the same devotion to the Dalai Lama and practice Tibetan Buddhism.

The ICT reports detail new developments for Tibetans in Nepal from 2007 until the present day, documenting the insecurity and danger for Tibetans in transit from Tibet to India, and for long-staying Tibetan refugees in Nepal. The reports support the proposition that resolving difficulties for Tibetans in Nepal would also serve the interests of the Nepalese people and provide recommendations for a way ahead.