A Great Mountain Burned by Fire

A Great Mountain Burned by Fire

A Great Mountain Burned by FireMarch 10, 2009, marked the 50th anniversary of the Tibetan Uprising in Lhasa that led to the Dalai Lama’s escape from Tibet, and the first anniversary of an unprecedented wave of overwhelmingly peaceful protests that swept across the Tibetan plateau, to be met by a violent crackdown. 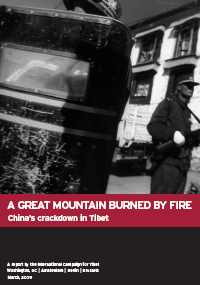 Since March 10, 2008, the Chinese government has engaged in a comprehensive cover-up of the torture, disappearances and killings that have taken place across Tibet combined with a propaganda offensive against the exiled Tibetan leader, Nobel Peace Laureate the Dalai Lama.

In February and early March, the Chinese government stepped up levels of intimidation and adopted an increasingly harsh and systematic approach to silencing Tibetans and suppressing dissent, with the authorities calling upon officials, security forces and the general public to “crush” any signs of support for the Dalai Lama. State repression and the hardening of the Chinese government’s position on the Dalai Lama have created deepening tension in Tibet, the opposite of the ‘genuine stability’ that President Hu Jintao states is the leadership’s priority.

This is the only known period in Tibet when protests have continued despite the severity of Beijing’s response and its attempts to impose a news blackout. In response to an official ban on an important prayer ceremony in the Tibetan area of Sichuan province, a monk set himself on fire and was shot. Just a few days later, more than 100 monks protested in defiance of a ban on praying at their monastery, calling for religious freedom and for Tibetans in their area to be released from prison. In a rare and specific denial, the Chinese state media said that the monks had been engaged in “normal religious activity” and were not protesting (Xinhua, March 3).

During the 50th anniversary period, Tibetans continued to ‘disappear,’ often being taken from their homes in the middle of the night to face extreme brutality in ‘black jails.’ According to figures given in official statistics, 1,200 Tibetans remain unaccounted for since the protests began. The increase in numbers of political prisoners since March 10, 2008, is likely to be the largest increase that has ever occurred in Tibetan areas of the PRC under China’s current Constitution and Criminal Law. A list of more than 600 names and details of prisoners who have been detained since March 2008 is provided with ICT’s report.

‘A Great Mountain Burned by Fire: China’s Crackdown in Tibet’ details new campaigns directed against Tibetan culture and religion in the last few months. Almost any expression of Tibetan identity not directly sanctioned by the state can be branded as ‘reactionary’ or ‘splittist’ and penalized with a long prison sentence, or worse. Pop stars, artists and writers have been detained under a new drive against “cultural products” with suspect ideological content such as songs referring to the Dalai Lama, and in music bars Tibetan performers are no longer allowed to address the audience as “Tibetan brothers and sisters” because it is considered “subversive” to the “unity of the nationalities”.

Despite the severe risks, Tibetans continue to express their views and pass on information. Blog posts, emails and articles indicate an unquenchable spirit and expression of a deeply-felt Tibetan identity.