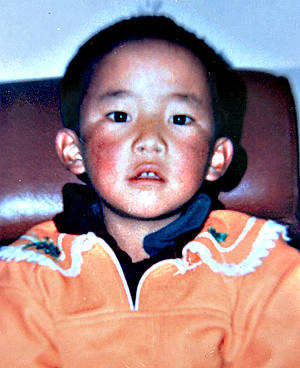 [Excerpt] One of the most important records of events in Tibet during the imposition of democratic reforms and the Great Leap Forward comes from the 10th Panchen Lama. In 1962, the Panchen Lama was an avowed supporter of the Chinese state and its ideology who had spent the previous 13-years loyally working with the Communist authorities as part of their United Front. By the end of the Great Leap Forward in 1961, however, he had become so concerned over the situation in Tibet that he sent a 70,000 Character Petition to Chinese Premier Zhou Enlai detailing the devastating impact that the combination of democratic reforms, repression and famine was having across the Tibetan plateau, with a particular focus on the behavior and attitudes of CCP cadres toward Tibetans. The petition was a secret document intended only for the eyes of the Communist Partys top leadership, and it began with typical paeans to Zhou. When the 10th Panchen Lama addressed the problems arising in Tibet, his critique was devastating: the democratic campaign, which was carried out in conjunction with suppression of the rebellion, was a large-scale, fierce, acute and life-and-death class struggle, which overturned heaven and earth. He criticized the implementation of reforms, accusing cadres of painting large numbers of Tibetans as counterrevolutionary or black and of acting out of a fierce hatred toward Tibetans.

On the state of Tibetan Buddhism, the Panchen Lama was particularly critical.  He wrote, In the whole of Tibet in the past there was a total of about 110,000 monks and nuns.  Of those, possibly 10,000 fled abroad [following the Dalai Lama], leaving about 100,000.  After the democratic reform was concluded, the number of monks and nuns living in the monasteries was about 7,000 people, which is a reduction of 93 percent. He continued, Due to this, the sweet dew of teaching, debating and writing and listening, thinking and contemplating has dried out. The Panchen Lama also reported to Zhou that Of the 2,500 monasteries which had once existed [in what is now the TAR] only 70 were left, and 98-99 percent of the estimated 1,900 monasteries in Kham and Amdo were also destroyed.

He asserted that the first task of reform appeared to be to attack religion in the name of eliminating superstition. He was alarmed by the Democratic Management Committees that were set up in monasteries, and whose members had illicit relations, went with prostitutes, drank excessively and took other such unscrupulous actionsregarded ignoring their vows as nothing, and publicly and unscrupulously engaged in liaisons with women within the monasteries, kept their hair long, changed their clothesand encouraged the masses of the monks also to do so. As a result of this louche atmosphere, and the fact that monks were spending so much time performing mundane labor, religious activities were as scarce as stars in the daytime, he wrote, adding that the situation was tantamount to the elimination of Buddhism [in Tibet]This is something that I and more than 90 percent of Tibetans cannot endure.

He condemned those who destroyed religious buildings and materials as having usurped the name of the masses and put on the face [mask or mianju] of the masses and the attempts to portray such destruction as resulting from Tibetans raised socialist consciousness to be sheer nonsense which comes from a complete lack of understanding of the actual situation in Tibet.

On the subject of the famine that had swept Tibet, the Panchen Lama was equally scathing. Although he was careful to blame incorrect local implementation of policies amid the suppression of the rebellion for the disastrous impact of the Great Leap Forward, his description of the damage resonates with frustration. He noted that for a period, because the life of the masses was poverty-stricken and miserable, many people, principally the young and old, died of starvation or because they were physically so weak that they could not resist minor illnesses. Consequently, there has been an evident and severe reduction in the present-day Tibetan population. The passages on famine movingly recount how he learned of the deprivation and death that was taking place across Tibet by talking to local representatives in Qinghai, commenting at one point that it is barely possible to describe the lives of the masses of the agricultural and animal breeding peoples[T]his really should not have happened. He reserved his harshest criticism for the local cadres he believed were at the root of the problem because of their lack of understanding of and regard for local knowledge, conditions and people. After expressing concern about those arrested and their loved ones left behind to meet extreme production quotas, he noted that methods of reform were not based on the wishes, demand and level of consciousness of the majority of the remaining masses of the peoplethere was no careful consideration of whether or not the conditions were ripe [for collectivization]the majority of things which should have belonged to the individual were put into the category of things belonging to the collective In summary, he declared, many people thought that the Tibetan nationality was being viciously attacked due to the authorities means of suppressing the rebellion, particularly the attacks on Tibetan Buddhism and Tibetan nationality which Tibetans love as their own lives.

While Zhou Enlai initially appeared to welcome the Panchen Lamas testimony about the true situation in Tibet, Mao and others around him were infuriated by it. Mao, who had been temporarily sidelined after the failures of the Great Leap Forward, had regained control of the Party and immediately went after the Panchen Lama. In August 1964, Mao launched a new campaign called the Socialist Education Movement, under which the Panchen Lama was denounced as a traitor to socialism, removed from his official positions and subjected to seventeen days of struggle sessions. During these struggle sessions, he was accused of absurd crimes: attempted restoration of serfdom, murder, planning to launch a guerrilla war against the state, cohabitating with women, criticizing and opposing China in a 70,000 character document, supporting the Dalai Lama and misleading the masses, and theft of valuables from monasteries. He was subsequently taken to Beijing and placed under house arrest, where he remained until the beginning of the Cultural Revolution.

The question of Chinese legitimacy in Tibet continued to serve as a meta-narrative for Chinese cultural repression long after the 10th Panchen Lama died in 1989.

Again, as excerpted from the ICT report:

[Excerpt] After the 10th Panchen Lamas death in 1989, CCP authorities had immediately grasped the importance of controlling the search, selection and recognition of the 11th Panchen Lama. They announced a seven-point plan for the process, elements of which were consistent with traditional Tibetan practices, but importantly they insisted that the selection would be made by means of the golden urn lottery and subject to final state approval.  The PRC government began to propagandize that the selection of the Panchen Lama and Dalai Lama reincarnates had always been the prerogative of prior imperial Chinese governments and would be so now. Soon after the 10th Panchen Lamas funeral, Chinese Premier Li Peng announced that outsiders would not be permitted to meddle in the selection procedure.

The monks of Tashilhunpo Monastery, the seat of the Panchen Lamas, were placed in an untenable position. In the case of the Dalai Lama and Panchen Lama, there was historically a pattern of mutual recognition of their reincarnations and subsequent religious educations  the so-called sun and moon relationship. The Dalai Lama made clear his view that it was his sole prerogative to recognize the Panchen Lamas reincarnation and that this was a spiritual matter beyond the reach of the PRC government. The abbot of Tashilhunpo Monastery and head of its DMC, Chadrel Rinpoche, was placed in charge of the search committee. The monks of Tashilhunpo had publicly demanded that the Dalai Lama be the final arbiter regarding the Panchen Lamas reincarnation and knew his approval was essential for the Tibetan people to accept the legitimacy of the selection, but they were in a weak position to resist Beijings will.